From the beginning of time, there have been terrible tragedies in both World Wars, Millions lost their lives.

Before that and even in this time the number of horrible murders increase but Guns are not the number one cause of death.

Seeking to “cash in” on the tragedy in California, gun-grabbers in Washington, DC launched their first ambush under the cover of darkness last night.

END_OF_DOCUMENT_TOKEN_TO_BE_REPLACED

Imagine the truth that a man that cannot do his job in congress has now done something that will forever tarnish the constitution if you the voting public do not act to remove this man from office.

Harry Reid must be recalled or removed from office because of breaking the oath of office of the United States Senate.

Today, without warning, Harry Reid acted on the threat he made earlier this year and broke the rules to gut the filibuster.

Reid’s scheme violates over two centuries of precedent and crushes the rights of the minority party by changing the basic rules of the Senate with only 51 votes — ignoring all existing rules and precedents.

By pulling the so-called “nuclear option” Harry Reid will now be able to ram Barack Obama’s radical executive and judicial branch nominations through the U.S. Senate with the slimmest majorities.

Now that the precedent has been set, it’s only a matter of time before these new rules extend to U.S. Supreme Court nominees and all legislation.

As the sponsor of the Card Check Forced Unionism Bill, Harkin remembers that citizens like you used the filibuster to defeat his scheme to end secret-ballot elections in unionization campaigns.

In fact, over and over again since our founding, the National Right to Work Committee and our members have used the Senate filibuster to keep Big Labor from stealing even more destructive monopoly power.

All of those defensive victories are now in jeopardy.

The next step, as we’ve warned, is to take over the courts.

Harry Reid’s underhanded maneuver paves the way for Barack Obama to pack the D.C. Circuit Court of Appeals as revenge for rebuking his unconstitutional “recess” appointments to the National Labor Relations Board (NLRB).

Our constitutional system is based on the bedrock principle that the different branches of government provide checks and balances to protect our liberties and the rule of law.

Make no mistake: Your rights as grassroots citizens have been weakened today. And the President and Senate Majority Leader now have unprecedented power.

Our job just got tougher. We must stay on higher alert.

Thanks again for everything you did in this battle. I’m going to need you to stay vigilant more than ever.

Are there some serious problems with the so called gov shutdown?

Is the Tea Party going too far?

In some ways you could expect to see some serious backlash going on in regard to the problems that are about to effect this nations ability to be America.

TWT: The games politicians play: Barack Obama is having a lot of fun using the government shutdown to squeeze the public in imaginative ways. The point of the shutdown game is to see who can squeeze hardest, make the most pious speech and listen for the applause. It’s a variation on the grade-school ritual of “you show me yours, and I’ll show you mine.” Read more 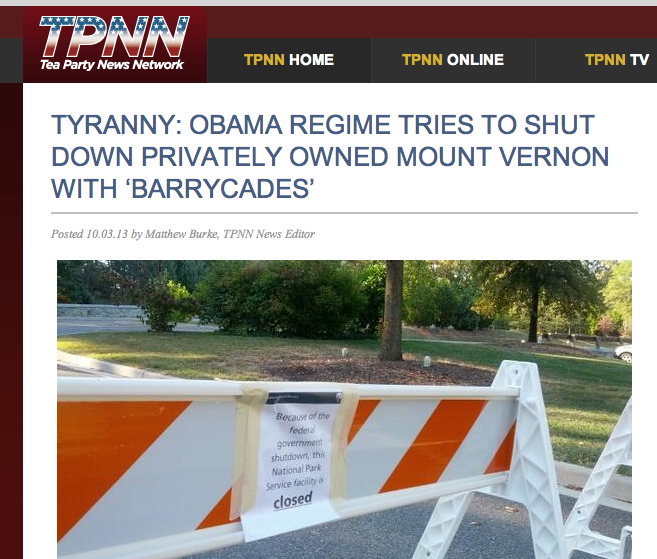 Are we being sold out by politicians?

You might have heard that Senate Republicans “saved” the filibuster yesterday.

But thanks to a reported backroom deal between John McCain and Harry Reid, the filibuster wound up effectively being a dead letter against the nominations in question.

But Reid didn’t even have to follow through on this threat to get everything he wanted and then some.

Reid is now pretending he gave something up by withdrawing two of Barack Obama’s nominees to the National Labor Relations Board — Obama’s two bogus “recess” appointees who have continued to issue decisions even after a federal court ruled their appointments were unconstitutional.

But it is a Pyrrhic victory at best.

You see, John McCain promised Harry Reid that Senate Republicans would agree to ANY new NLRB nominees, no questions asked.

Not only that, as part of the “deal” Republicans promised to expedite the confirmation process.

And just hours after McCain and Reid cut the deal behind closed doors, Barack Obama had his own secret meeting with top AFL-CIO union boss Richard Trumka.

The fact is, Harry Reid is facing no price for his outrageous threat to break the Senate rules and gut the filibuster.

And because John McCain put together a preemptive surrender on the new nominees, Harry Reid, Barack Obama, and Richard Trumka are going to get exactly what they want: A biased National Labor Relations Board that will continue to run roughshod over worker freedom.

What John McCain is ignoring is that the filibuster isn’t just about the rights of the minority party in the Senate.

It’s about you, the American people.

So the question is not whether or not the union bosses and Harry Reid, with the help of Senator McCain, won — they did.

The question going forward is whether you and I on future executive branch and judicial nominations can inject some backbone into the Senate Republican Minority.

It’s an open question, but it’s clear we must try.

Thanks again for all you do.

We can all say that we have seen some really crazy stuff going on in politics these days, but this story is really making a lot of people mad.

source. One of Barack Obama’s liberal supporters, Senate candidate Gabriel Gomez, made news this week when he tried to act like a tough guy and challenged conservative Republican, Michael Sullivan to “man up.” The Senate race in which Gomez and Sullivan are competing is of critical importance.

END_OF_DOCUMENT_TOKEN_TO_BE_REPLACED

Is Karl Rove washed up?

is he no longer the powerful thinking man that he once was?

The truth may be that Karl is no longer the man he used to be and there are some very good reasons why.

Karl Rove has declared war* on the Tea Party Movement. Our response? BRING IT!

END_OF_DOCUMENT_TOKEN_TO_BE_REPLACED

The media prognosticators have all weighed in and they all say the same thing its like watching a parade where goose stepping monsters in lock step repeat the party line.

Will we see a fair debate?

Will it be biased…

Will they ask the president about his golf game while they ask Presidential Candidate Romney about an unsolvable physics problem?

You have to wonder about the situation because when you consider what is happening in the news media it begins to become a concern to listen to the media its all over, no need to have an election because the polls say that Obama has already won…

Why waste all that money on an election? The thing is unlike the 1960s you cannot trust what you see and hear on most of the media including the so called fair and balanced Fox news company which sadly is just not the solid news company it once was.

Now you might think that the media have an agenda and you would be allegedly right.

You might wonder why they are allowed to distort fact with alleged fiction, mostly opinionated fiction at that.

The thing is when you look at how ignorant the media actually are you have to wonder how they make any money at all.

The news media keeps trying to find ways to do Barack Obama’s bidding and undercut the Romney/Ryan team.  First they jumped on Mitt Romney like a pack of jackals and badgered him endlessly about his comments about how it was wrong to apologize and appease radical Islamists who were storming our embassies.
Then the media pounced on the secret recording of Mitt Romney correctly noting that Democrats have now gotten close to 50% of the population hooked on government handouts, and how it’s nearly impossible to win the votes of people who don’t want to give up their handouts from the government.  They want to keep the ‘redistribution of wealth’ in place.

And after these relentless attacks, what did the media do?  They then hyped all these polls showing that Obama was leading after they had smeared the Romney/Ryan ticket.  But the irony is they still had to skew the polls by oversampling Democrats to get the result they wanted.

The media is in the tank for the Obama/Biden ticket and today they sank to a new low.  Politico published a report saying that Paul Ryan was trash talking his running mate, Mitt Romney, and had begun referring to Romney behind-the-scenes as “the stench.”

A flurry of other media outlets then began circulating the report, and saying it showed how bad things were going for the Romney/Ryan ticket.  The big problem:  it’s entirely untrue.

So often it appears that they think that they are smarter than anyone else but the truth is far different.

Vote in November because the truth may save America.

The media however are stupid, they lie at every opportunity even the so called fair and balanced, Fox news have hired so many liberals that half of those bobble heads, take every opportunity to sound more and more liberal.

Because if you do not vote you might never get another chance, every election year the media have become more and more aggressive in trying to influence the outcome of elections.

They tell lies, they distort facts, and they allow others to come on their shows and lie and they never even bother to challenge the lie.

When that happens I just turn the TV off.

Because I am sick and tired of Fox news simple because they tell lies and they distort the news and they have the nerve to try to say they are fair and balanced, If you watch Bill orielly, you can tell that there is some serious spin going on there and very often he just lets them get away with lying on TV, unless it involves a child then he is usually on board.

The thing is this, if you continue to move further to the left eventually you will become left of center and you will become so lost that you will not know where you are, you will think that you are in the middle of a no spin zone but in reality your really further left than you ever thought you would end up.

The truth about voting is that this year may be the most important election in the history of this nation it might decide if we will continue as a nation or if America will become lost in the field of lies and fools that think they are better than anyone else.

This year Vote, find out if your neighbor needs a ride to the polls to Vote…

Get your friends together have a voting party…

America is about to become either a great nation once again or it is going to cease to exist.

it is that important.

Get it for less than you think

Get What You Want with EBAY